A friend asked me whatever happened to my blog where I write about what I'm reading. I had to hang my head in shame. So much for that resolution to write something about every book I read this year. I do want to write a bit more about what I liked, didn't like, read, didn't read... etc. And I positively must comment on the large number of books I read about monks and nuns. Completely unintentional, I swear. But for now, here's the list. And maybe there will be more to come as far as my comments about the list!


Appendix, for what it's worth:

I've been meaning to write more about this book, but I have several other more pressing and/or important things I should be writing instead. So in case I never get back to that post I'd like to write, here are some quotes that I would say more about had I the time, quotes that have been intersecting with my life in many ways lately. I hope they make some sense and carry some measure of meaning to you, even without the context.

The adult must seem to mislead the child, and the Master the dog. They misread the signs. Their ignorance and their wishes twist everything. You are so sure you know what the promise promised! And the danger is that when what He means by ‘wind’ appears you will ignore it because it is not what you thought it would be—as He Himself was rejected because He was not like the Messiah the Jews had in mind.
--C.S. Lewis, quoted in A Severe Mercy, p. 191

It is not possible to be 'incidentally a Christian.' The fact of Christianity must be overwhelmingly first or nothing.
-Severe Mercy, Sheldon Vanauken, p. 86

...though I wouldn't have admitted it, even to myself, I didn't want God aboard. He was too heavy. I wanted Him approving from a considerable distance. I didn't want to be thinking of Him. I wanted to be free--like Gypsy. I wanted life itself, the color and fire and loveliness of life. And Christ now and then, like a loved poem I could read when I wanted to. I didn't want us to be swallowed up in God. I wanted holidays from the school of Christ.
-Severe Mercy, p. 136

...we talked of the 'Island in the West' in Pilgrim's Regress--that something we long for, whether it be an island in the west or the other side of a mountain or perhaps a schooner yacht, long for it in the belief that it will mean joy, which it never fully does: because what we are really longing for is God.
-Severe Mercy, p. 110

Just a couple quotes from Godric, by Frederick Buechner:

It's less the words they say than those they leave unsaid that split old friends apart. (p. 89)

When friends speak overmuch of times gone by, often it's because they sense their present time is turning them from friends to strangers. Long before the moment came to say goodbye, I think, we said goodbye in other words and ways and silences. Then when the moment came for it at last, we didn't say it as it should be said by friends.
(p. 90)

Reading for the journey

I went to a conference in Vancouver last week and went on to visit family in San Diego before returning to South Africa. I spent far too much time on planes and sitting in airports (I visited a grand total of 6 airports on my various flights), and as such, did a lot of reading. Here's the list:

A Severe Mercy, Sheldon Vanauken
I started this one about a week before I left, and then debated whether I should take a half-read book with me. If I'm gonna carry a book around, I want to get the most possible reading out of it that I can. I ended up bringing it anyway, and I'm really glad I did. It was a re-read, but as usual, this reading was very different from the first time I read it. (Summer 2003, I think? I remember this one going on my application for DPI, under the "three books you've recently read" question.) This is a memoir, telling the story of Vanauken's relationship with his wife, Davy. What stuck out to me on my first read was the idyllic love story. This time around, I was impacted far more by the account of Vanauken's spiritual journey. I'm gonna write more about this one, I think I still need to take more time with the thinking and writing.

The Water Horse, Dick King-Smith
I already posted about this one--a fun book which I read in its entirety while standing in the children's book aisle of a W.H. Smith in the Heathrow airport.

Emily's Quest, L.M. Montgomery
The Emily books are not nearly as well-known as the Anne books, but they're just as good (if not better). I re-read Emily of New Moon before I left California, and brought the other two Emily books with me. I discovered after finishing Emily Climbs that I had packed the last of the series in the duffel bag which I had left at my parents' house, with plans to bring it back with me when I visited in June. This made me very sad, because I immediately wanted to read this one upon finishing the previous one. So of course, this was the first book I read on my various flights back to South Africa. It gave my the L.M. Montgomery fix I'd been craving, as well as my fill of hopeful romantic sentiment which may or may not have been good for me. Hmm. I read it far too quickly, though...

A Great and Terrible Beauty, Libba Bray
I purchased this one in LAX, since I was already halfway through Emily's Quest. I had 20 hours of flying and a 7-hour layover ahead of me, and only about 300 pages of reading left. It ended up being a very good thing that I purchased this book--I finished reading all the books I had with me about an hour and a half before my final flight landed in Joburg. I have this fear of running out of reading material and there being no good movies on the plane. That almost happened on this trip, and by the time the plane landed I was very much ready to disembark! This was a YA gothic sort of thing about a girl at boarding school in Victorian England who begins to unravel mysteries about her past and discovers realms of magic and so on and so forth. It was quite good, just the sort of thing for plane reading, really.

A Tale of Three Kings, Gene Edwards
We're reading this for NCSA during the last few weeks of the year. I'm supposed to lead the discussions on this book, so I thought I'd get a head start on the reading--partly to see if we could also fit a few final chapters of Divine Conspiracy into our last weeks. I concluded that the answer is yes--this is a short book (less than 100 pages), and a really fast read. It's a retelling of the Old Testament stories of David and Saul and David and Absalom, and is quite devotional in tone. I really enjoyed the perspective it gave on leadership and submission and the right and wrong way to respond to good and bad leadership.

And there's my reading over the past few weeks. I doubt I'll read nearly as much in the next couple of weeks, even though my stash of books here in South Africa has now grown exponentially (due to my bringing back the aforementioned duffel bag full of books). 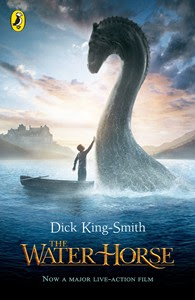 This book wins the prize for shortest period of time between me watching the movie and finishing the book. I watched the movie on a flight between Jo’burg and London, and noticed it was based on a book by Dick King-Smith, one of my favorite authors when I was a kid. The movie ended, the plane landed, and a couple of hours later, I came across the book while browsing in a W.H. Smith in Heathrow. As it was under 100 pages long, I proceeded to read it right there in the children’s book aisle.

I discovered that the movie bears very little resemblance to the book other than the fact that the plot revolves around a little Scottish boy named Angus who finds an object at the seaside which then hatches into a Water Horse, grows rapidly, and then finds a home in Loch Ness. I actually enjoyed the movie more than the book (gasp!). It was a fun book, but there was a little more substance to the movie, strangely enough. Except that the movie cuts out the grandfather, who they call “Grumble” because he complains about everything. How awesome is that? 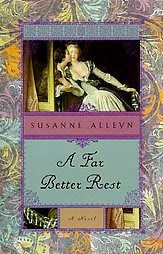 This was ok. That's about it. It filled my need for "more French Revolution!" without getting me a few hundred pages into Les Mis, only to abandon it due to lack of time when getting to South Africa became foremost in my concerns.

This is one of those spin-off books. It imagines the events in the life of Sydney Carton (from Tale of Two Cities) during the parts of the book where he disappears from the narrative. The bits of this novel that of necessity overlap with the action of Tale of Two Cities end up being a bit tedious, because, ok, I had just read Tale of Two Cities. The changed perspective in these parts of the narrative really didn’t add anything for me. I’ve ready plenty of novels & stories where shifting the telling of the same event to a different perspective adds new layers of meaning. This one didn’t really do that for me.

The bulk of the book is taken up with newly invented events, assuming that Carton moved to Paris and established himself in the middle of the political circles of the day. This part of the narrative was most interesting to me because it filled in some details of the political climate of Paris during the French Revolution.

However, I found it a little implausible. If Carton was well-known to such prominent figures as Robespierre, Marat, and Desmoulins, he would have been well-known enough in Paris that his likeness to Darnay would not have gone unnoticed. Kind of throws a wrench into the climax of the story. But (as with many historical novels) this author felt the need to thrust Carton into the middle of the action as far as French politics were concerned. I think this is one of the ways Dickens succeeds in the historical novel genre--he focuses on one group of people caught up in the events of history, rather than making them central to those events, or even adjacent to the people central to those events.

There’s a kind of amusing (to me) afterword/disclaimer at the end, which mildly argues that Dickens sensationalized the Terror and that it wasn’t so bad after all. The author compares the number executed during the Terror to the number killed during one of the Napoleonic battles. Small but important distinction that the author failed to draw out: those executed during the terror were, well... executed. Casualties of war are considerably different from executions carried out over a period of days and weeks. Executions ordered following hasty and dubious trials and convictions, I might add.

What I did enjoy in reading this was learning a bit more about the politics surrounding the time period that’s so central in Dickens’ novel. When I finished Tale of Two Cities, I was curious to read more about the same time period, and this novel did that--filling in some of the political details and context very well. While it was interesting for me to explore some additional fictional narrative focused on this historical time period, I wouldn’t exactly recommend this one heartily.